The neutralists are touting a study by a German research center alleging Comcast blocking of BitTorrent at all hours of the day:

The Max Planck Institute has released a new survey of worldwide BitTorrent traffic finding that Comcast and Cox are the chief offenders for throttling traffic, and that they block at all hours of the day and night.

The study is here.

The following statement is attributed to Gigi B. Sohn, president and co-founder of Public Knowledge: â€œ…These results lead us to three conclusions. First, the largest cable companies were doing more blocking than they have admitted to Congress or to the FCC. Second, other cable companies, and all telephone companies, can manage their networks without the need for blocking the traffic of customers. Finally, the fact that the blocking goes on all the time should tell the Commission that it needs to act soon to prevent the practice.â€

Like a good engineer, I tried to measure my Comcast link using the German tool, and got this (click on the image to enlarge:) 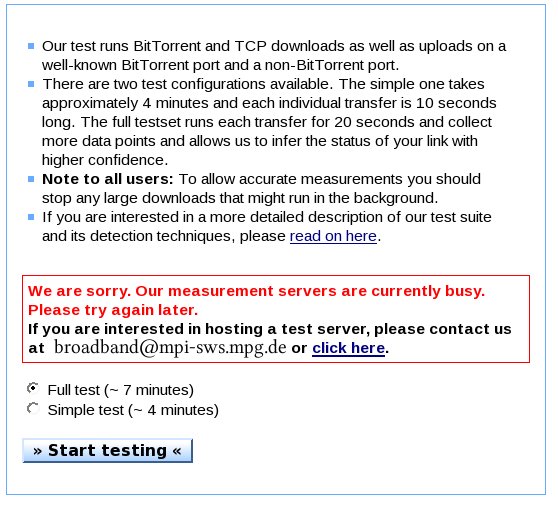 This tells me that the test system has some problems, as the server has been busy for several hours. Feel free to try it yourself.

I know my BitTorrent isn’t blocked on my Comcast connection because I tested it in real-world conditions: yesterday, I successfully downloaded Fedora Linux version 9, over Comcast using BitTorrent, at full speed and with no interruptions. I then seeded it for several hours before shutting down Azureus (the Linux client for Vuze’s implementation of BitTorrent) and just restarted it an hour ago. So I’m now seeding without incident (click to enlarge:) 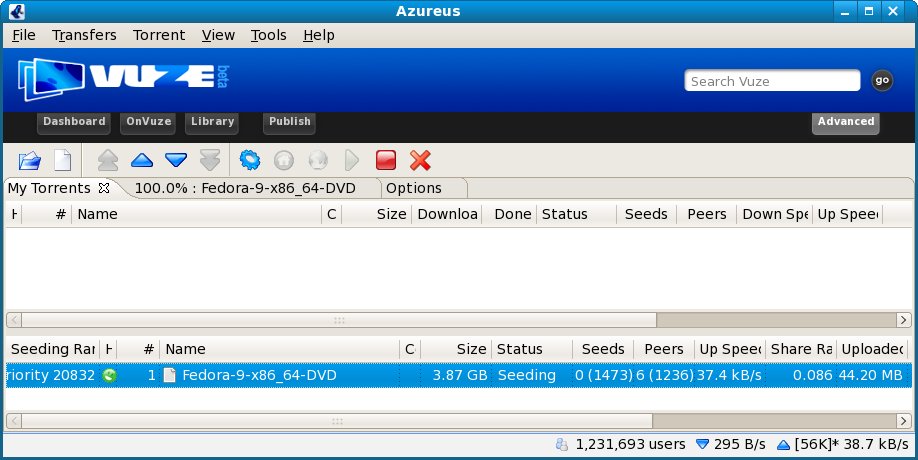 Pardon me if I’m skeptical of Ms. Sohn’s charges. It may be that the Germans have found something, but I can’t confirm it; perhaps we need a better instrument.

The Germans are apparently measuring TCP-level behavior, the thing that CMU professor Jon Peha and the infamous David Reed have measured and commented upon. The problem with this analysis is that Vuze’s BitTorrent uses 50 TCP streams by default, continually testing them for the 4 best and making these 4 active at any given time for any given piece of content. So while some of the 50 are torn down by Sandvine management systems, they’re quickly replaced and you retain 4 active upstream TCP connections most of the time.

The test that should be done would simply record the seeding rate of popular BitTorrent sessions like mine. When you do that – test the overall contribution to the swarm, not the 50 TCP connections individually – you find that BitTorrent works quite well on cable networks, contrary to the claims that the neutrality regulation advocates are making.

The German tool simply doesn’t produce meaningful data, and the advocacy groups touting it (Free Press is another) it are deliberately misleading the public.

UPDATE: Peter Svensson, Free Press’ personal reporter, has written the predictable story about the evils of the BitTorrent blocking uncovered by the alleged research organization in Germany. It’s predictable because Svensson ran the gamut of interviews with ISP critics, but didn’t talk to anyone who might shed light on the study. In fact, reducing the number of active TCP connections from a given BitTorrent user often increases his throughput, just like metering lights on freeway on-ramps increase freeway traffic speeds. This is only one of the critical points that these amateur network engineers don’t get.