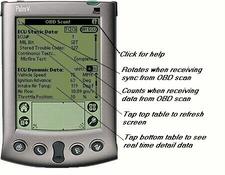 This deal plugs your Palm Pilot into your car so you can figure out why the “service engine soon” light is on. It displays diagnostic codes, makes some cool graphs, and gets you through smog check.

Glenn Fleischman interviews Mr. Omninet Phil Belanger for Wi-Fi News: Vivato Unleashed and mines some interesting details about how the Vivato system works. It’s clearly a generation ahead of the other “smart antenna” systems in the works, and stands out for its combination of technology and channel marketing sense. If I were working for a company that thinks it has a smart antenna in the works, I’d be worried, but I’m not, so I’m amused at the prospect of coming trainwrecks. It’s about time Belanger had some success, BTW — he’s been slogging away at LANs since he was at Corvus in the early 80s.

David Weinberger has been thinking about the Internet, and the webheads and greedheads. He’s especially fascinated by a 20-year-old paper on network design:

I’ve been thinking about the end of the Internet. No, not its collapse, but as in the”End-to-End” (E2E) argument, put definitively by David P. Reed, J.H. Saltzer, and D.D. Clark in their seminal article, End-to-End Arguments in System Design. The concept is simple: whenever possible, services should not be built into a network but should be allowed to arise at the network’s ends.

Let me prick this bubble, if I may: the Internet was not designed correctly. This is especially true from the standpoint of real-time services, such as streaming audio and video. The fundamental problem is that the end-to-end model only works when timed delivery is not important, because it’s not able to manage the system-to-system, network-to-network, and router-to-router links that have to be managed for bandwidth to be reserved and used efficiently by real-time services. The Internet runs on telephony-based services such as ATM and SONET that provide for real-time delivery, quality of service selection, and bandwidth sensitive billing, but the Internet protocols, especially IPv4, mask access to the controls that run these links and make real-time at best a matter of faith and prayer and massively over-built datalinks.

If the connection-oriented, end-to-end services provided by TCP had been implemented at the network layer instead of at the transport layer, the Internet would be poised to gracefully carry the next generation of services. But it wasn’t, so it’s not, and IPv6 doesn’t fully remedy the deficiencies. Don’t hold up any engineering exercise done twenty-five and thirty years ago as state-of-the-art, and don’t try and build a model of human morality on it – it’s a losing proposition.

But the curious highlight was the spaghetti, of which I was initially skeptical. Quite simply, this was large vermicelli, cooked well past al dente (but not mushy at all) and sauced with the Cozy Corner formula we’d enjoyed on the ribs. I tasted out of pure curiosity, but I finished the cup with sincere fascination.

I’m going to have to re-evaluate my criticisms of France now that IRA supporter Peter King of New York is bashing them. Click Guardian Unlimited | Special reports | Rod Liddle: We’re their allies – so why aren’t they ours? for details:

And then, rather disconcertingly, it suddenly occurred to me that this was the same Pete King who has spent the past 15 years similarly eviscerating the British, or the “Bruddush”, for “centuries of oppression” inflicted upon the Irish people. Pete could always be relied upon to say a few words in support of Martin Galvin’s evil Noraid organisation, or to wade into some delicate and confusing conundrum of Northern Ireland politics with his size 12 cowboy boots, ready to give succour to the IRA for the sake of securing a few more votes from his Irish and faux-Irish constituents. He always did so with a mixture of brio and crass ignorance. It is the same Pete King, isn’t it?

King, like Teddy Kennedy and Tom Hayden, has a long history of supporting the terrorist IRA. His views therefore don’t matter.

Hillbilly Reynolds, BTW, disregards the article on King since it mistakenly identifies him as a Senator rather than a Representative. That’s not too bright.

Link via Dr. Frank, who’s not soft on the IRA.

It turns out that German foreign minister Joschka Fischer has a long and checkered history of beating and burning police officers, and of harboring terrorists. See Germany’s Mr. Tough Guy for details.

SAN FRANCISCO — Sun Microsystems Inc. hopes to leapfrog competitors such as IBM and Intel in the emerging area of server blades by launching multicore microprocessors that can handle as many as 32 separate threads. The technology will form the basis of new Sparc processors that will be discussed when Sun discloses its processor road map late this month.

These would be the first multi-core, multi-thread CPUs in the business, if Sun can pull it off. It’s not clear how register-sharing is going to work, and if it’s actually manufacturable, but it sure sounds neat.

via Hack the Planet.

Justene Adamec’s Calblog is your definitive source for info on the Davis recall drive, which is gaining traction according to media sources.

I hope we’re all on the same page now.

This is a legit job open at UNMOVIC

The incumbent is responsible and manages all the Communications and Information Technology Networks located within the mission, including the supervision of a number of individual units, such as the Satellite, Microwave, Rural Telephone, VHF/UHF/ HF, Telephone PABX, Assets Management, Switchboard, Rigging, and the Office Equipment units, plus the IT Network Administration, Software Development, Systems Support, Hardware Support and Help Desk units respectively.

Apply now and avoid the rush.